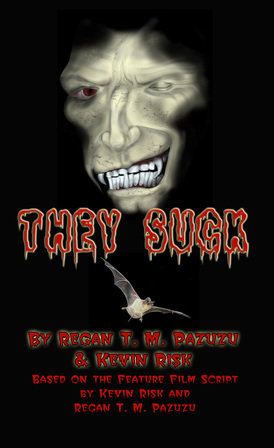 The novelization of the screenplay I co-wrote (under the name Regan T. M. Pazuzu - this one's definitely not for kids, please note!) with my husband, Kevin Risk, called They Suck is published and available for sale on Lulu.com and Amazon.com!

SYNOPSIS :   A mutated vampire with extraordinary, unnatural thirsts chooses a queen for his new race of Vampires - a tidy, obsessive-compulsive woman named Nicole Ridley who is later found “dying” by her enraptured, animal-loving fiance, Robert Spavor. Sadly, not understanding the nature of the attack on his true love, Robert and his animals struggle in vain to save her. Soon after, the city is terrorized by the wantonly vicious attacks of the newly born vampire Nicole. Her lurid escapades soon attract everyone’s attention, including her ex-lover, who finally realizes the intense gravity of the situation. Robert and his troubled friend, Terry, wage war against these grotesque Vampire Mutations, which culminates in the silliest, most Blood-stained, gory, epic battle ever created!


Check out the collectively created They Suck Book Launch Party script!  This was an "online performance" and launch event on Facebook on December 6th, 2016, where the characters from They Suck interacted at the book's official online launch party...Mwah-hah-hah-hah...Check out the raw, original script and event page HERE (remember to read the December 6th entries from bottom to top).  Cast included:  Simone Cordice as Terry and the Ninja, Kim Croscup as Nicole and Mr. Tibbs (the pony), R. J. Downes as Robert and Prince William (the turtle), Regan T.  M. Pazuzu as the Author, Dr. Waddle and Silver Elvis, Jason Reilly as Dr. Hanzenkrotchez and Hamster, and Kevin Risk.

You can also find They Suck at Bakka Phoenix Books! 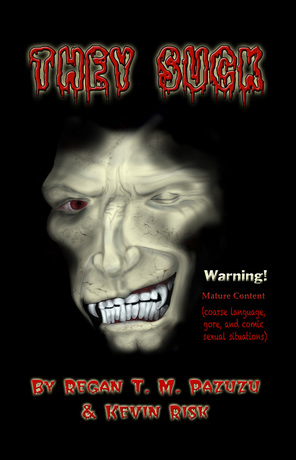